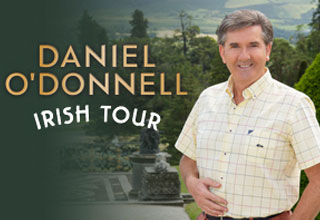 
It’s good news for Daniel O’Donnell as his brand-new studio album has reached #16 in the UK Charts. This is Daniel’s 35th consecutive year that the singer has had an album in the UK Top 40 charts.
Daniel released his brand-new studio album of original material I Wish You Well last week 4th November 2022. Available in two formats – a Deluxe A5 Media book, signed by Daniel, which includes a 14-track CD, DVD and hard-back book and a standalone 12 track CD in a Digi sleeve.
The DVD in the Deluxe version features a ‘making of the album’ film, along with a book crammed with new photos of Daniel, taken in and around the studio during recording sessions.
Daniel is currently performing dates in Branson, MO, USA. In further news, Daniel has announced dates for his upcoming Irish Tour, a 13-day national tour of Ireland for 2023 which kicks off 11th August in Athlone culminating at the Cork Opera House 30th August 2023.
The album was recorded at Black Mountain Recording Studios in Jenkinstown in County Louth. Keen to work with local musicians and songwriters, the album was produced by Dave Atkins who played in Daniel’s band before going into production full time, and Ciaran Mitchel who is Daniel’s Musical Director.
A mix of up-tempo songs and ballads, I Wish You Well includes two ‘Buble-esque’ tunes - Under A Spell of Loving You, written by Fergal Flaherty and Always There written especially for Daniel by Brendan Graham and Rolf Lovland who wrote You Raise Me Up.
The album also features two songs by P J Murrihy, who has written for Daniel in the past, and who penned I’m Grateful and Plains Of Old Kildare. Sean O’Farrell wrote If You Believe, and Once You Have Loved The Best and Patsy Cavanagh contributed the title track I Wish You Well.
Prior to the album, Daniel delighted his fans, with a spooky surprise for Halloween as he starred in Night of The Daniels - a mysterious curse threatened his local town and it was up to the maestro to save the locals, Daniel sprang into action to defeat the evil with the power of music and save the day. Watch the video HERE. Daniel once again collaborated with the makers of his previous viral video Down at the Lah De Dah - Shaun Doogan and Ciaran McCann of Re-Act Productions.
Daniel who is currently in Branson, Missouri said: “I am delighted to be back in the UK charts. I can’t believe that over the last 35 years I have had an album in the top forty each year. I am so grateful to all my fans who have been so loyal and supportive and helping the album to do so well. And what is really exciting for me, is that we are now back touring, I can’t wait to see and meet you all over the coming year, it’s been a tough few years.”
For more on Daniel visit www.danielodonnell.org or https://www.facebook.com/DanielODonnellOfficial.